Part One of this article can be read here. In this second part Emma discusses in detail a phenomenological way of knowing plants. At the end of the article she provides guidance notes on this process.

The question is not what you look at — but how you look and whether you see. – Thoreau

As I mentioned at the end of Part One, during the week long course we did not study an abstract theory, methodology, nor were we overloaded with information. Instead we were led from day one on our own pathway to living knowledge, by using the practice of phenomenological inquiry from the outset to get to know the world in terms of itself through our direct, lived experience. 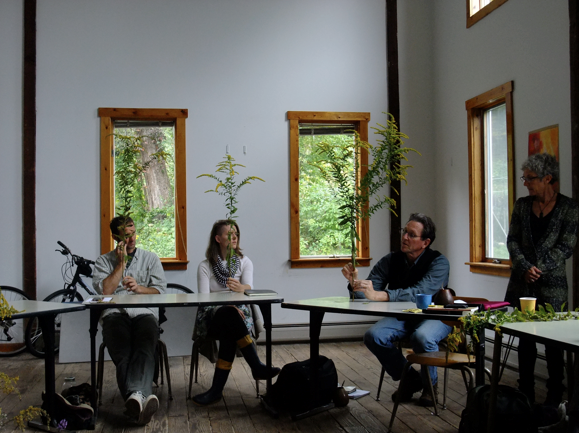 In the mornings we mostly worked with Craig on phenomenological plants studies, and in the afternoons with Henrike we did various forms of projective geometry, discovering the patterns of lawfulness that emerge from pure mathematics. From the very beginning Craig encouraged us to reverse our habitual approach to studying the world. To do something and then consider it, rather than to consider something in abstraction, and then do it. He described the phenomenological process as a shift of focus, a turning to something in the world where you enter the methodology through directly participating with the phenomenon, and this is what we did.

Over a series of sessions, both indoors and outdoors, we were encouraged to describe, as exactly as possible, the natural phenomena that we were introduced to such as the wildflower Golden Rod, which inhabited the surrounding sunlit meadows. During the process of describing our observations of the plants we were led to, gently but firmly, discern between descriptions that were true to our visual observations and that could be verified through consensus within the group, and to reject those that were projections, judgments or assumptions, and thus not true to phenomenon itself. The latter were held lightly and always put to one side so to be sure as possible that it was the phenomenon speaking to us, not us making things up on it’s behalf. In practicing a phenomenological inquiry the encounter with the phenomenon becomes a riddle, and being able to dwell in a space of ‘not knowing’ becomes vital. When we fix something with the idea that we ‘know’ it, we close a door it – a phenomenological inquiry keeps the door always open. During our observations and descriptions we were asked to consider the concept of what it even means ‘to know’ at all, and to develop the capacity within ourselves to remain open, whilst we allow ourselves to further deepen our relationship with the particular ‘riddle’ that we had chosen to engage with.

After practicing describing different natural phenomena such as the Golden Rod, we were then asked to reflect on our observations. What emerged was that all sense perceptions occur in the present moment, which means there are limits to what is possible when approaching a phenomenon in this way. When you get to the limits of your observations in the present moment, the impulse to experiments arises. To create more sense perceptions you may feel like you want to dissect the phenomenon, to refrain from being stuck in your own story, but then you end up breaking up the phenomenon rather than studying it as a whole. To get around this we used hand-held magnifying glasses to study a closer level of detail in our plants, but this was done with consideration and the knowledge that any apparatus we use is putting up a physical veil between the phenomenon and our direct sense perception. To gain an even broader, living  picture we went to the various different places that the plants grew, such as the meadows, hedgerows and woodlands, and observed the differing  physical contexts and how the plants manifested themselves the same but differently in different places and growing conditions. There was a huge contrast between how the plants manifested. In the sunny paddock, they were bursting full of tiny yellow flowers, just like a firework had been set off and then freeze framed. Where as in shaded woodland, only dappled with light, there was a much great degree of spacing between the flowers, the plants were smaller with fewer branches and the flowers organs even had a slightly different configuration. 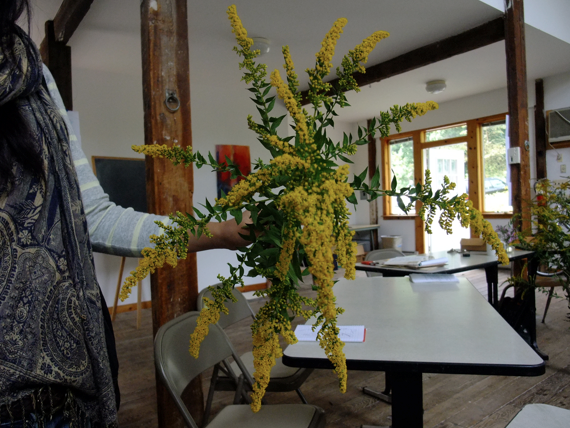 After our direct sense observations we used a technique that is called, exact sensorial imagination (or inner re-picturing), to re-member in our minds the exact details of the plants that we had previously observed. This is a process of reliving your encounter with the phenomenon, but inside your mind, as concretely and intensely as possible. It is a process that helps your mind to develop a dynamic way of seeing. It helps you to get a sense of the living dynamics of the phenomenon – dynamics that are not available to our present moment sense perception. It is similar to creating the effect that you would get by documenting a plant’s growth with a time lapse camera, but building your own cognitive capacities in the process. It allows us to build up a rich, fluid, internal picture and helps us to notice what we need to pay more attention to when we next return to the phenomenon.

During the week it became obvious that mystery is an important part of this process. There is an interesting tension in relation to the process of getting to know something and it becoming ‘known’. Whilst practicing a phenomenological attitude you interact with, discover the story of, and participate in the phenomenon in a way that keeps the sense of mystery alive. Through engaging in the process of ‘getting to know’ something, we also became more aware of the process of knowing itself. The phenomena that we choose to meet do not reveal themselves in their entirety to us immediately. You must meet them time and time again, and each time let go and allow yourself to respond differently and freshly to what you are seeing, similar to when you are authentically getting to know a new friend. Likewise for meeting anything new, if we just know something according to our primary experience of it restricts how fully we can actually meet it at all. The knowing that really matters for me, is the one that you can stand fully in, in your embodied sense of knowing that has arisen from your own experience of spending time with, and getting to know, the phenomenon directly. 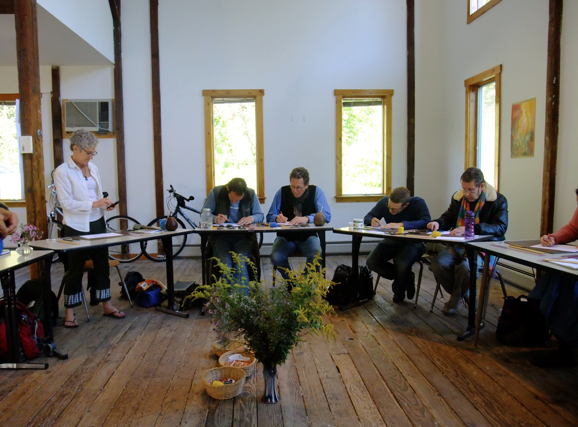 Plants are particularly wonderful phenomena to study as they have a special character that creates form that dies and becomes simultaneously. If we follow the form on a plant, we are led into it’s organic movement. The movement that we can observe, such as small new leaves growing on much older parts of the lower part of the stem, allows us to experience not just spatial dynamics but also temporal. We can begin to live into the life and form of the plant coming into and out of being.

The Nature Institute – Mission: Nature around us is whole and interconnected. Though we are part of nature, we do not yet fathom her depths, and our actions do not embody her wisdom. A fundamental shift in our way of viewing the world is necessary if we would contribute to nature’s unity rather than dissolution. At The Nature Institute, we develop new qualitative and holistic approaches to seeing and understanding nature and technology. Through research, publications, and educational programs we work to create a new paradigm that embraces nature’s wisdom in shaping a sustainable and healthy future.

I thoroughly enjoyed this course, and this style of participatory learning, and very grateful to Craig and Henrike Holdrege for hosting it. Through this course, and my continued interest in, and practice of phenomenological inquiry, I have found a pathway to living knowledge. I have discovered the depth of potential in ‘getting to know’ life in a participatory way. Being able to stand fully in my own knowing, rather than just consuming fixed knowledge, is a much more enriching, satisfying way to learn about the world. It is a method that does not judge difference, but welcomes and appreciates it. For me, when engaging in this process, everything becomes so alive, unique and utterly fascinating. Life, and knowledge, become livelier when my ways of knowing become as dynamic as the part of life itself that I am getting to know.

In terms of creating a pathway of living knowledge on a larger scale, such as within education or organizations, we can ask ourselves how we can help an encounter to arise from within the individual that involves them and the phenomenon in question, rather than just answering questions that the individuals themselves have not asked. In turn this could allow people to become part of a living organization that they co-create through participating in asking these questions together, potentially adding a new wealth of value, an untapped resource of knowledge and experience, that the teachers, Directors and CEO’s, may as of yet, not have imagined possible.

Emma Kidd is a researcher, writer, teacher, designer, facilitator, photographer and philosopher. Her work examines how humans can develop a dynamic way of seeing which is cultivated by participative enquiry and a deepening of our relationship to Nature and her dynamic organic systems. She teaches the practice of Phenomenology and offers a series of practical and interactive workshops designed to cultivate integrated ways of knowing within the individual and the organization. Part of her phenomenological work with plants is referenced in Henri Bortoft’s book “Taking Appearance Seriously: The Dynamic Way of Seeing in Goethe and European Thought” and she is a co-author of “Stories of the Great Turning” an inspirational collection of stories from a diverse collection of grass-roots sustainability projects. Her chapter is the story of her upcycling project, Emiliana Underwear (www.emilianaunderwear.wordpress.com) and she is the editor ofwww.sensinglife.net.

Ongoing phenomenological process for studying natural phenomena such as plants

There is no end….

The beauty and mystery of the natural phenomena surrounding us is such that as much as we may try, whether through phenomenology, or mechanistic experimentation, they may never fully become known and there will forever be something more, something deeper, left for us still to get to know.